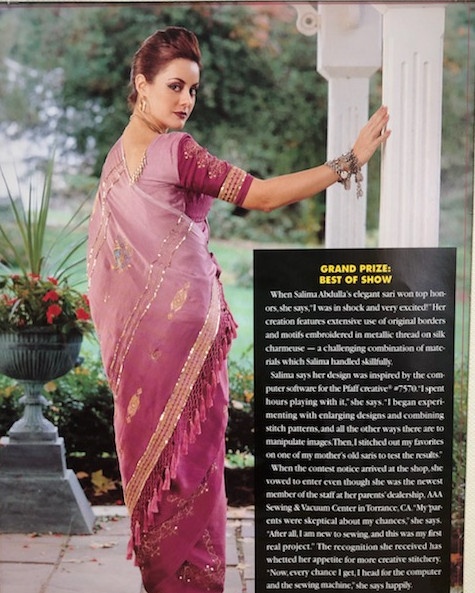 When Salima Jaffer's elegant sari won top honors, she says "I was in shock and very excited!" Her creation features extensive use of original borders and motifs embroidered in metallic thread on silk charmeuse - a challenging combination of materials which Salima handled skillfully.
Salima says her design was inspired by the computer software for the Pfaff creative #7570. "I spent hours playing with it," she says. "I began experimenting with enlarging designs and combining stitch patterns, and all the other ways there are to manipulate images. Then, I stitched out my favorites on one of my mother's old saris to test the results."
When the contest notice arrived at the shop, she vowed to enter even though she was the newest member of the of the staff at her parents' dealership, AAA Sewing and fabric in Torrance, CA. "My parents were skeptical about my chances," she says. "After all, I am new to sewing, and this was my first real project." The recognition she received has whetted her appetite for more creative stitchery. "Now, every chance I get, I head for the computer and the sewing machine," she says happily. 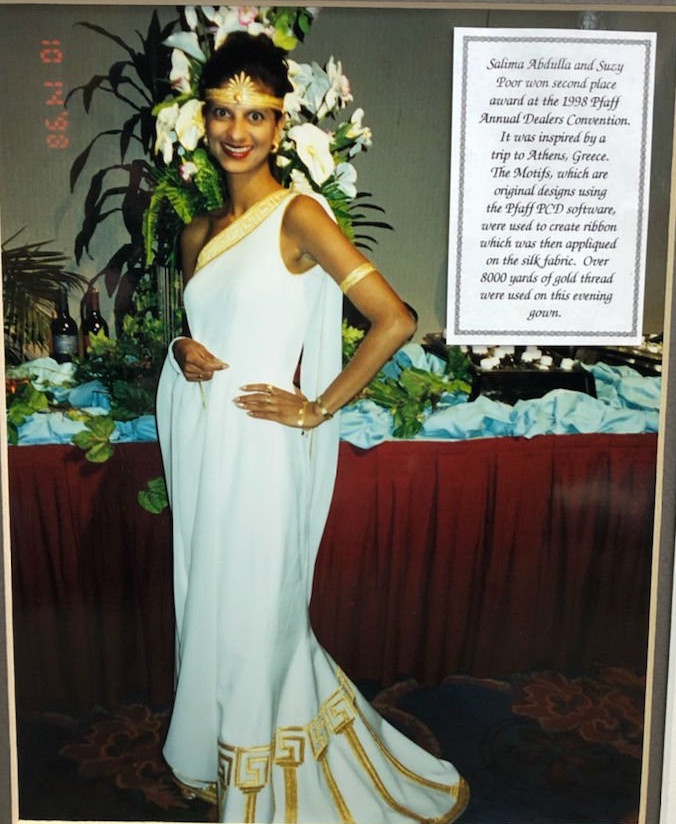 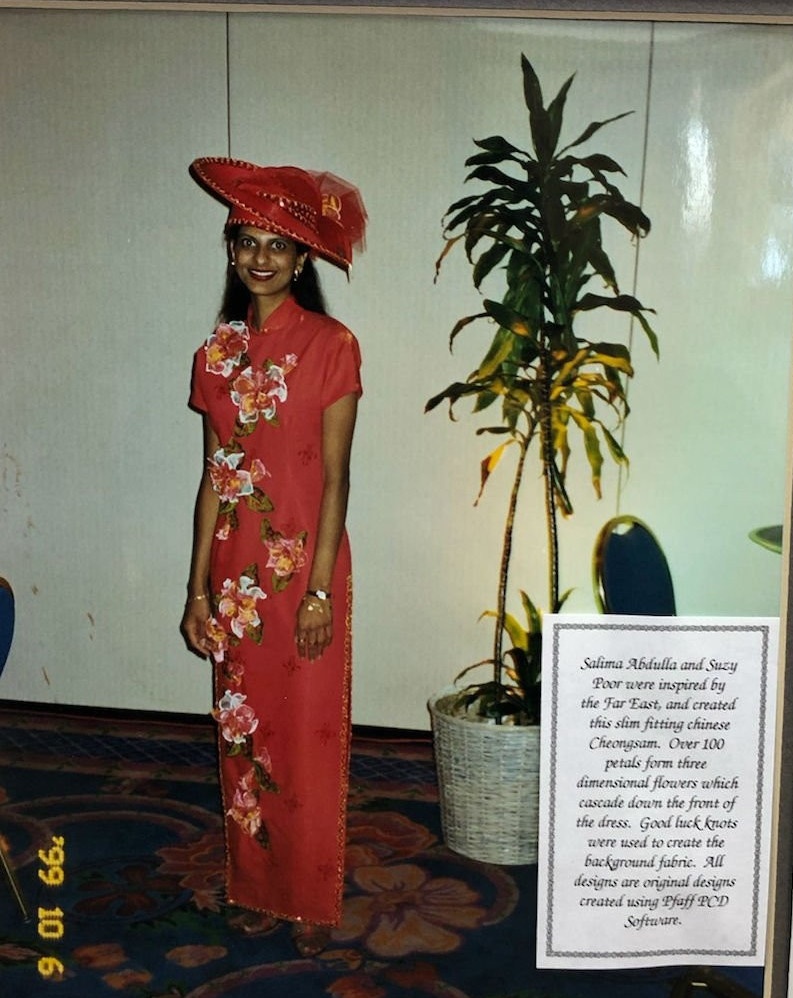 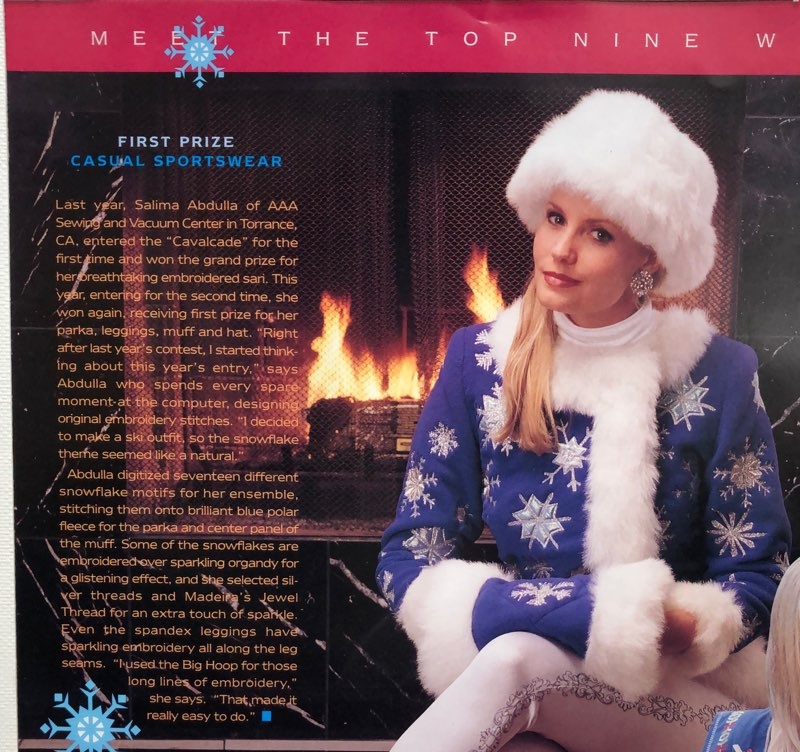 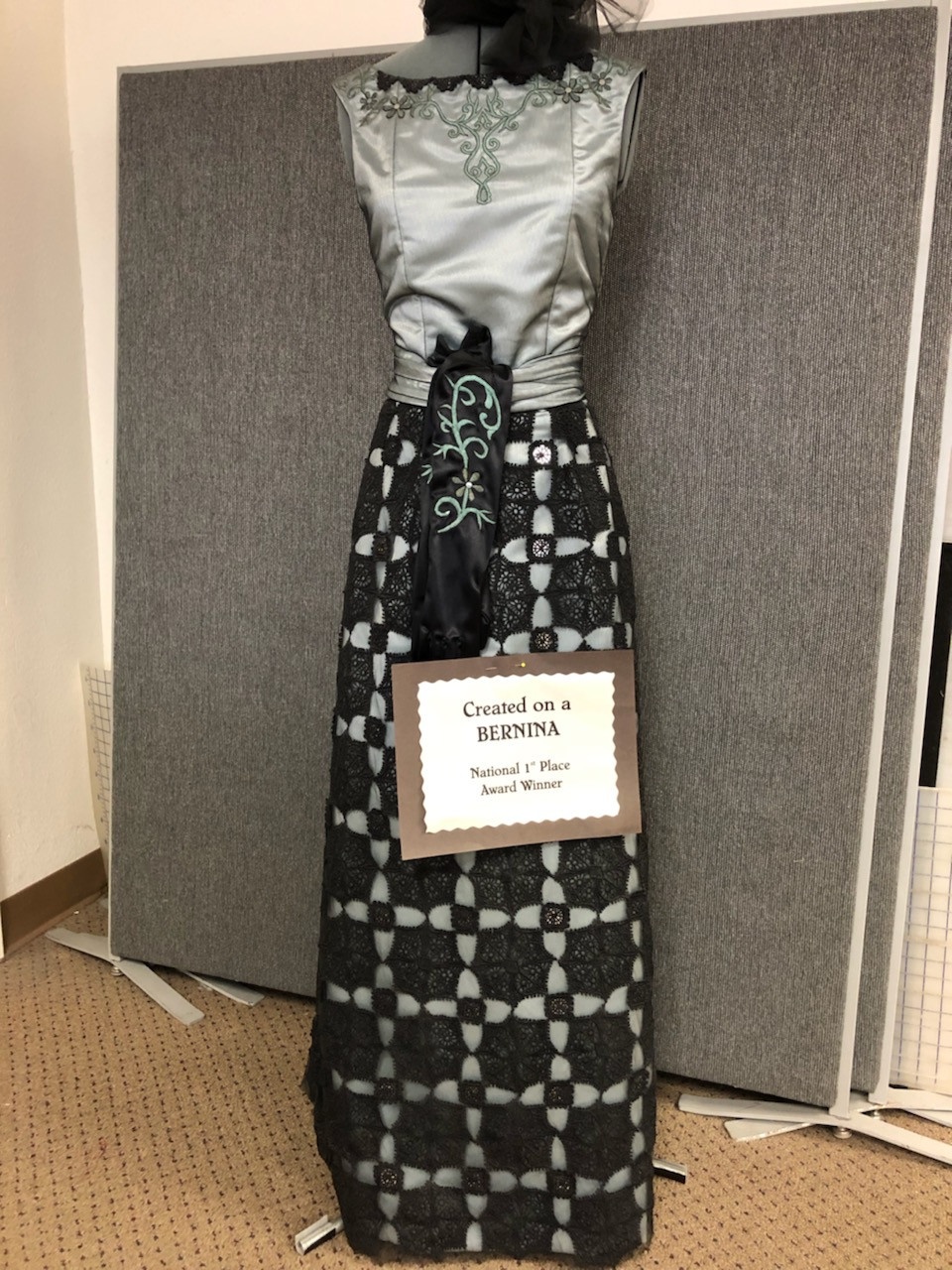 Salima Jaffer won second place award at the 1998 Pfaff Annual Dealers Convention.
It was inspired by a trip to Athens, Greece. The motifs, which are original designs
using the Pfaff PCD software, were used to create ribbon which was then appliqued
on the silk fabric. Over 8000 yards of gold thread were used on this evening gown.

Salima Jaffer was inspired by the Far East, and created this slim fitting Chinese
Cheongsam. Over 100 petals form three dimensional flowers which cascade
down the front of the dress. Good luck knots were used to create the background fabric.
All designs are original designs created using Pfaff PCD Software.

Salima digitized seventeen different snowflake motifs for her ensemble, stitching them onto brilliant blue polar fleece for the parka and center panel of the muff. Some of the snowflakes are embroidered over sparkling organdy for a glistening effect, and she selected silver threads and Madeira's Jewel Thread for an extra touch of sparkle. Even the spandex leggings have sparkling embroidery all along the leg seams. "I used the Big Hoop for those long lines of embroidery," she says. "That made it really easy to do."

The designs on this evening gown were embroidered entirely in the machine, one at a time and each taking an hour to stitch out.  They were embroidered on bridal tulle then sewn together to form the skirt.  The top has custom embroidery designs that were created and digitized using the Bernina Software.  This outfit was a show stopper at the convention and won the National  Award. 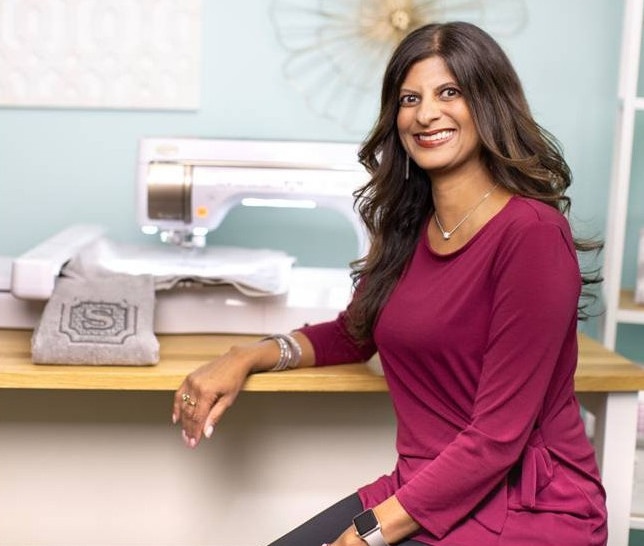 Thanks For Joining my Community! 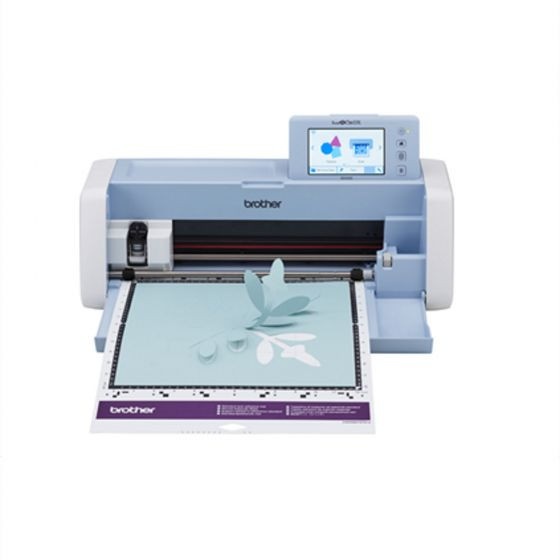